Agar base for the determination of toxicity of diphtheria microorganisms (DM1067)

This medium is used to determine the toxicity of Corynebacterium diphtheriae.

Corynebacterium diptheriae - rod-shaped, immobile, non-encapsulated, non-spore-forming, gram-positive bacteria. This organism is also known as the diphtheria wand of Clebs-Leffler, since it was discovered in 1884 by German bacteriologists Edwin Klebs (1834-1912) and Friedrich Löffler (1852 - 1915). Corynebacterium diptheriae is a human pathogen; Its pathogenicity is due to the production of a potent exotoxin that acts on various tissues, including the cardiac muscle and peripheral nerves. (1) Diffusion of a toxin from the crop sowed culture, which is suspected of Corynebacterium diptheriae, is demonstrated by the formation of a white line of precipitate, where the toxin is encountered Diphtheria antitoxin, diffusing from strips of filter paper, embedded in agar. In vitro toxigenicity (virulence) of Corynebacterium diptheriae was first described by Eleks. (2) The Eleks technology using standardized environments has been enhanced by King, Frobisher and Parsons. (3) This environment yielded results that correlate with tests in which the vaccination of animals was used. In addition, it has been discovered that proteosozepptone stimulates toxin production in addition to maintaining the constancy of results. Hermann et al. (4) developed an enrichment supplement without serum to overcome the interruptions encountered during enrichment using horse, sheep or rabbit serums. These enriching non-serum supplements consist of acid hydrolyzate casein, Tween 80 and glycerol. (5) When incubated cups are incubated, the line of precipitate is observed for toxicogenic strains.

The basis of agar to determine the toxicity of diphtheria microorganisms includes proteosozeppton, a source of carbon and nitrogen, necessary for the growth of a wide range of organisms, as well as for the production of a toxin. Sodium chloride maintains the osmotic balance of the medium. Potassium telluride inhibits most gram-negative bacteria, excluding species of Corynebacterium, Streptococcus mitis, Streptococcus salivarius and enterococci. Staphylococcus epidermidis can give rise to this environment.

The formula may be varied and / or supplemented to meet the technical requirements.

1. Only for laboratory use.

2. Hat, if necessary, until the media is completely dissolved, with frequent stirring, to prevent overheating.

6. Before filling the medium in the diameter of the cup, place a strip of filter paper impregnated with a powerful diphtheria antitoxin. Allow the strip to drop to the bottom of the cup.

7. Suck the cup with a large amount of inoculum across the strip.

Amber is a slightly opalescent gel formed in Petri dishes

The reaction is 3.75% solution

Cultural properties are observed with the addition of a nutritional supplement to determine the toxicity of diphtheria bacteria (MS145) and 0.5 ml of sterile 1% potassium tellurite (MS024) after incubation at 35-37 ° C for 24-72 h.

Agar base for the determination of toxicity of diphtheria microorganisms, 500 gr 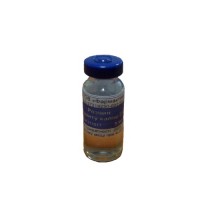 Potassium tellurite in Microbiology is used as a selective agent. It inhibits the growth of mos..

Tags: Agar base for the determination of toxicity of diphtheria microorganisms, 500 gr